High-resolution cryoEM structures from 100 keV data? With EIGER we can!

The most important overall factor in single-particles cryoEM is the extraction of the maximum information about the structure of the biological molecule or complex under investigation for a given amount of radiation damage. The natural question you should ask is then “what is the best electron energy for cryoEM?”. Mathew Peet, Richard Henderson and Chris Russo of MRC-LMB of Cambridge provided us with a clear answer in a recent paper (reference 1). For small biological particles embedded in a 30-nm thick layer of vitreous ice, the optimum energy is 100 keV.

In collaboration with MRC-LMB, we had previously characterized our DECTRIS EIGER detector technology in terms of its MTF and DQE (“Electrons are the new photons” ).

It turned out that our hybrid pixel detectors are counting electrons very efficiently, especially at 100 keV. It seemed logical to proceed with the acquisition of SPA data at 100 kV on various biological complexes spanning various sizes, ranging from large ribosomes particles down to small complexes such as DNA-binding proteins less than 10 nm in size. An example of the latter is given below in Figure 1.

The data was collected on a 100 keV FEG TEM using an EIGER X 500K operated at 9000 frames/sec in continuous readout mode. This extreme speed allows recording movies in counting mode while keeping the total exposure time within less than two seconds. Even with a standard side-mounted cryo specimen holder, the data quality is not affected by mechanical stage drift, while keeping data collection workflow a time-efficient and user-friendly process.

The results were just published in the IUCr Journal (reference 2). 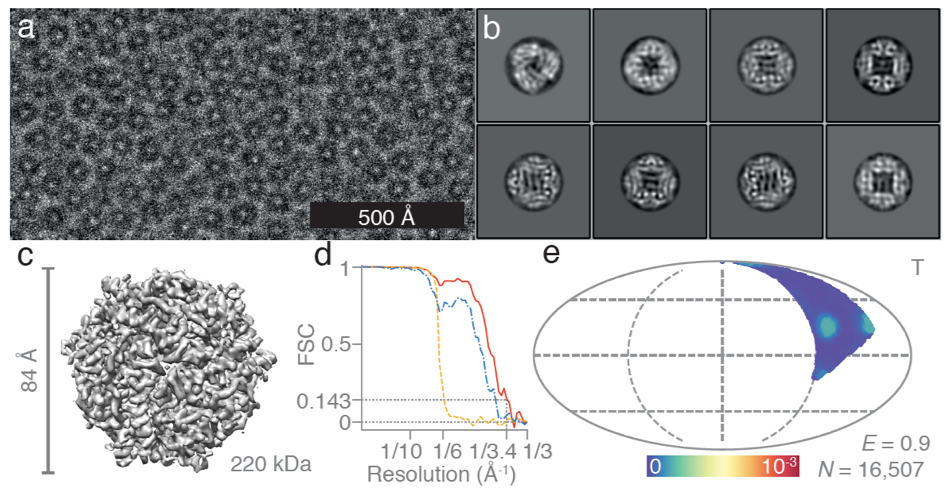 Figure 1. Structure of DPS (DNA protection during starvation protein) determined at 100 keV. (a) Typical micrograph of DPS after motion correction. Contrast is adjusted to ±3σ from the mean intensity. (b) 2D class averages. (c) Sharpened masked 3D reconstruction of DPS from N = 16; 507 particles with tetrahedral (T) symmetry. (d) Gold-standard FSC plot corresponding to the calculated map, showing the correlation between the phase randomized (yellow), unmasked (blue), and masked (red) half-maps. The plot terminates at the Nyquist frequency. (e) Orientation distribution of the DPS particles contributing to the final reconstruction (Mollweide projection). All Euler angles are assigned within one asymmetric subunit for the tetrahedrally (T) symmetric particle. The colour scale (linear) corresponds to the normalised density of views (blue - low, red - high). E = 0,9 is the efficiency of the orientation distribution, indicating nearly uniform sampling of the particle views. From Reference 2. 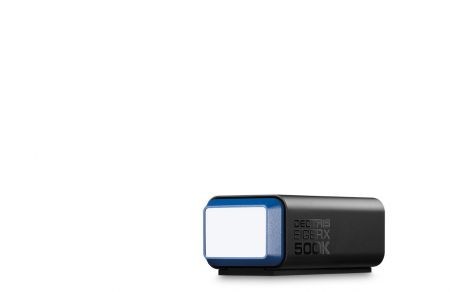 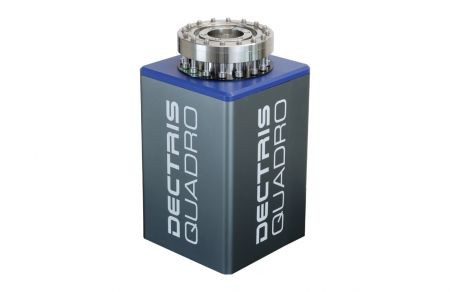 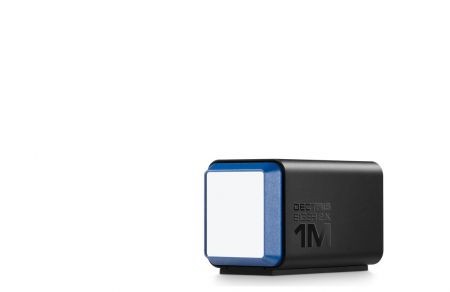 Sign up in DECTRIS E-Mail Newsletter for news, events, upgrades and special offers.

We assure you that your personal infomation will not be shared with others.