Plasma physics in pursuit of energy for the humanity

The nuclear fusion process on the Sun could satisfy the never-ending need for energy on Earth in a sustainable and safe manner. But how can we recreate such a process, and more importantly, how can we control it? We sat down with Dr. Luis Felipe Delgado-Aparicio from the Princeton Plasma Physics Laboratory (PPPL) to find out more about his work on the nuclear fusion and the role X-ray detectors play in it. 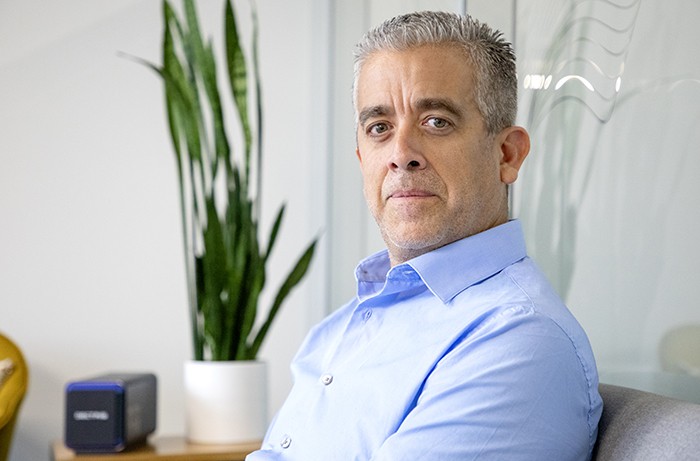 Dr. Luis Felipe Delgado-Aparicio on his visit to DECTRIS in December 2019.

The basics of plasma physics

The three fundamental states of matter are solid, liquid and gaseous state. Plasma, the fourth state of matter, is produced when the temperature of vapor is dramatically increased, causing gas atoms to split into their constituent components, electrons and ions (nuclei). On Earth, plasma can be observed in lightning strikes and polar lights, but the largest sources of plasma are the stars, including our Sun.

In plasma, the nuclei of light atoms can fuse into heavier atoms and produce energy. This nuclear fusion process is responsible for the Sun’s energy output. Using nuclear fusion processes to produce energy on Earth requires specialized laboratories and power plants that can recreate the conditions close to those on the Sun. Complex experimental setups include not only high-temperature chambers, but also reliable tools for monitoring the plasma and its processes within the container.

How do you create and contain plasma in your laboratory?

Luis Felipe Delgado-Aparicio, research physicist at the PPPL: Every fusion reactor has a plasma containment device that can be based on various concepts such as tokamak or a stellarator. Depending on the aspect ratio of a reactor, its containment device can have a shape of a donut or an apple. In order to generate plasma, the container device first needs to be put under vacuum. Then, the gas is introduced into the device and heated up to thousands millions degrees. This generates plasma. The challenge is to keep the plasma off the walls of the containment device because any collision with it would cause the plasma to vanish. To control the plasma we use a set of magnets around the containment device. Thanks to the right combination of electric and magnetic fields, we are able to make the plasma "levitate" in the middle of the evacuated vacuum chamber. Thus, we can study it, control it, and ultimately to produce nuclear fusion and energy.

What do X-rays have to do with plasma?

Luis: Electrons in plasma move very fast and carry the current, which creates a magnetic field. This is very important to us because we need this magnetic field to confine plasma. The electrons that gyrate around are extremely fast and energetic, therefore they emit hard X-rays. At the same time, the bulk of the plasma emits soft X-rays. The hotter the plasma gets, the higher is the X-ray energy it emits. We use the emitted X-rays and their intensity for plasma diagnostics, which allow us to understand how it moves, but also to measure its temperature, velocity, pressure, and density. This is why we depend on reliable X-ray detectors in our work.

How do you use X-ray detection in a plasma experiment?

Luis: Confinement devices used in plasma physics are usually made from stainless steel or inconel (a type of a superalloy) and have very thick walls. Naturally, you would think that nothing could escape it. However, we have beryllium-based "windows" for X-rays. At these windows, we can observe X-rays using pinhole cameras. We evaluate the width of a specific line of emission from plasma to gain an insight on how hot it is, while the shifts of a particular line give us indication on how the plasma gyrates in one direction or another. In our plasma experiments, X-rays are detected using pinhole cameras that allow us to see the emission form the top to the bottom part of the reactor and therefore scan the whole plasma emission the same way bodies are scanned in hospitals using computed tomography.

Why did you opt for DECTRIS detectors?

Luis: To begin with, we needed a very specific geometry of the X-ray camera. The basic 100K module has something of the order of 500 pixels in one direction and 200 pixels in the other direction. This size is very useful to image an entire cross-section of the machine. However, our aim is to use these small modules at different locations of the machine. This way, we can integrate the data in two directions and obtain some sort of tomography data. The other important factor was that DECTRIS offered a complete set of options to operate its detectors in vacuum. Finally, DECTRIS detectors can do the pulse-height analysis within a particular pixel. Our new approach is based on changing the energy threshold for each particular pixel in a predefined energy range. We can do a special calibration of a detector that allows us to change the energy at which every single pixel will do a measurement. That is extremely powerful because we can go from imaging the outer part of plasma to imaging its core. We can see how the plasma moves and how it transports heat and particles.

What are the critical X-ray detector parameters in a plasma experiment?

Luis: One of our aims is to measure all the X-rays coming from the machine, both low and high-energy X-rays. This means we need two different sensors. A silicon (Si) sensor gives us an extremely good ability to measure X-rays from 2 keV up to 20 keV, while a cadmium-telluride (CdTe) sensor is suited for measuring the high-energy tail up to 100 keV. The other critical point in a plasma experiment is time. Currently we are using detectors that feature a frame rate of up to 500 Hz, which allows us to take an image every two milliseconds. That is good! But we can go even faster. With EIGER2 we will be able to see highly dynamic magneto-hydrodynamic instabilities, ways of how plasma moves inside the reactor.

How about intensities of measured lines?

Luis: Our measurements are focused on strong resonance lines. If plasma has impurities, there might be an abundance of lines of different charge states of a particular element. For example, argon has 18 electrons, but when it enters the plasma, it starts to ionize. Once all the electrons are removed, it does not emit light. However, an argon ion left with one or two electrons in the orbit still emits very strong light. At MIT, we have carried out experiments in the 5-millisecond regime and still obtained thousands of counts. However, fusion reactors differ in the production of light, the temperature and the density. The light generated in a reactor scales as density square. In our experiments, we are using systems in very dense machines with high magnetic fields, so a lot of light can be obtained even if a diffraction element is used for the selection of a particular line.

How do detectors withstand the harsh environment of the experiment?

Luis: The front end of an X-ray camera does not have any problems with the high magnetic field. The back end, however, would have issues with control cards, capacitors and adaptors. The advantage of the DECTRIS X-ray detectors we use is that the front and the back end can be physically separated. We put them as far away as possible, and if that fails we can still install a magnetic shield. So far, we have not had any issues with our detectors. There is another factor to consider – the temperature, especially if the camera is placed close to the beryllium window. As we are operating our detectors at temperatures above 40° C, we have to water-cool the container in which detector is placed, which is a standard solution. What needs to be improved is the detector’s radiation hardness to neutrons. These neutral particles steam out of the nuclear reactor and cause damage to X-ray cameras if they exceed 1012 or 1013 neutrons per cm2. 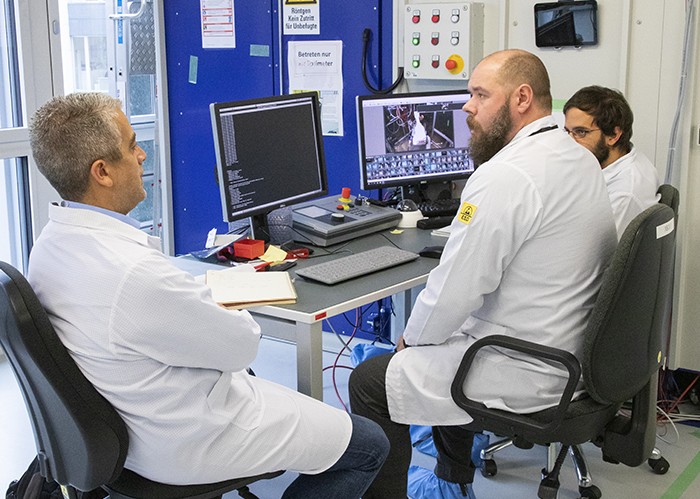 Dr. Luis Felipe Delgado-Aparicio and his team at a DECTRIS X-ray box.

Luis: The current nuclear power, nuclear fission, relies on radioactivity, a process that is extremely difficult to handle. Nuclear fusion, on the other hand, brings the lightest elements in nature together – hydrogen isotopes that are found in the ocean. It is safe, because if something were to happen to the reactor, it would compromise the vacuum. If there is no vacuum, plasma simply vanishes with no consequences.

What is the next scientific question that you would want to answer if you had infinite resources?

Luis: The question that I would like to answer is how to deal with the reality of having to put this hot state of matter into a container. Sometimes the containment walls are made of high-Z materials, such as tungsten. When tungsten falls in the center of plasma, it can cause plasma to lose energy and simply disappear. I would like to find out a mechanism to actuate in plasma, to flash away the impurities, so that the center can be clean and hot and allow us to produce energy.

How do you see the future of plasma fusion?

Luis: We have a very bright future. Renewables are an excellent solution for many places in the world, but we need a high-density solution. This means nuclear fusion power. It is extremely safe and can give us the same sort of energy that we have in the universe. We are not the only ones trying to develop nuclear fusion for the humankind. Many countries are investigating it as illustrated in the international ITER program, dedicated to the most powerful fusion device in the world. We are trying to come up with solutions on how to study plasma, see plasma, and control plasma, using active tools. The only way to do that is by looking at it. And the only way we can look at it is through X-rays.

Luis Felipe Delgado-Aparicio studied Physics in the Pontifical Catholic University of Peru. He has worked four years at the MIT and, since 2013, he has been working at the Princeton Plasma Physics Laboratory (PPPL).

About Princeton Plasma Physics Laboratory (PPPL)
The U.S. Department of Energy’s Princeton Plasma Physics Laboratory (PPPL) is a collaborative national center for fusion energy research. The Laboratory advances the coupled fields of fusion energy and plasma physics research, and, with collaborators, it develops the scientific understanding and key innovations needed to realize fusion as an energy source for the world. An associated mission is providing the highest quality of scientific education.