Crystal-related arthropathies (CRAs) encompass a spectrum of inflammatory and destructive joint diseases, all of which are caused by the presence of crystals in and around joints. Based on the chemical nature of crystals, different types of the disease can be distinguished, e.g. monosodium urate (MSU, in gout), calcium pyrophosphate (CPP), and/or calcium hydroxyapatite (CHA). To diagnose and monitor CRAs, it is crucial to identify the causative crystal. The current clinical modalities include three approaches: light microscopy, dual-energy computed tomography (DE-CT), and conventional radiography (CR). Yet, although all of these modalities can provide helpful data for accurate diagnosis, they have some shortcomings. To develop a non-invasive imaging procedure that is safe, simple, and accurate, PD Dr. Roman Guggenberger and Dr. Florian Huber from the Institute of Diagnostic and Interventional Radiology at the University Hospital Zurich have envisioned a new method based on Spectral Photon-Counting Radiography (SPCR).

We sat down with the two to discuss how classic radiographic hardware, upgraded with a photon-counting detector, could be used clinically to diagnose CRAs. 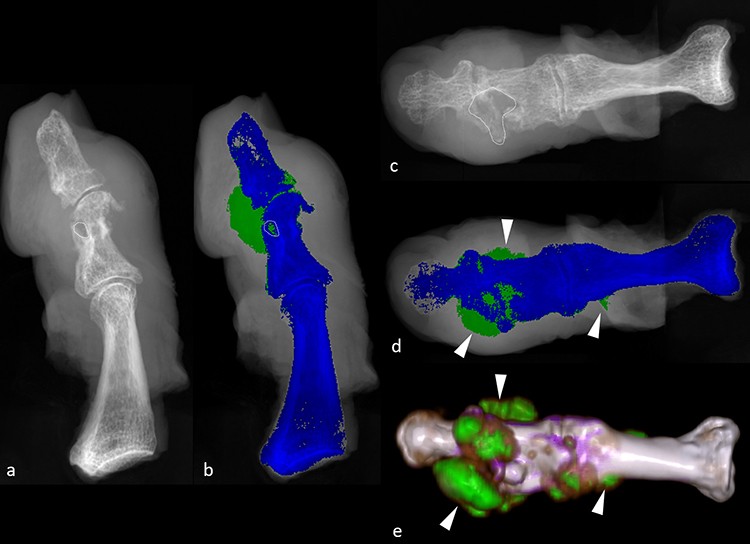 The image shows an ex-vivo human toe in lateral (a, b) and anterior-posterior (c, d) projection. Images a and c are normal radiographs acquired in a new experimental setup, b and d are color-coded using the multi-energy information. Image e is a correlation in the current gold standard dual-energy CT with similar extent of gout tophi (green areas, white arrowheads). The osteolytic regions in images a-c are in comparison significantly smaller than real disease extent.

Read the summary of the recent publication on SPCR

Roman Guggenberger, PD Dr. med.: Put simply, SPCR is plain radiography enhanced with a photon-counting detector that allows for reliable and detailed material decomposition. By using the detector’s energy thresholds, we were able to differentiate X-ray energies, and thus to perform material decomposition based on the effective atomic number of the materials. The detector was the crucial element in adapting radiography for the diagnosis and monitoring of CRAs.

Why is there a need for a new clinical modality to diagnose and monitor CRAs?

Florian Huber, Dr. med.: One of the troubles with CRAs is that they come in various forms; in order to diagnose a specific subform, it is important to identify the crystals that are causing it. The gold standard for this is polarized light microscopy, as this method allows the sample to be differentiated based on the crystal’s morphology. Yet, although this approach yields high specificity, it is rather uncomfortable and painful for the patient – the only way to obtain a sample is by sticking a needle into a joint and aspirating the crystals! Due to a substantial sample error rate, this approach is also associated with modest sensitivity.

Dual-energy computed tomography (DE-CT), on the other hand, is more widespread in clinical practice; it is a scanning modality in which two X-ray beams are operated at different energy levels that allow for the gathering of 3D information. DE-CT is not invasive; however, it requires a sophisticated machine and a trained technician. Other drawbacks include artifacts in the data, which are caused by the patient’s movements, as well as the relatively high radiation dose that is imposed on the patient. It is also not the cheapest modality: when compared to conventional radiography, for example.

We therefore wanted to find a cheap, non-invasive, and simple technique that can yield the same or better specificity and sensitivity as compared to light microscopy, with a lower radiation dose than DE-CT.

Roman: Indeed, existing clinical modalities represent a good solution, but there is  room for improvement. In our research, we sought to develop a method that would fulfill four major requirements:

•    Specificity, i.e. reliable differentiation of crystals in the joint;
•    Sensitivity, i.e. detection of crystals that are present even in small amounts;
•    Safety, i.e. non-invasive detection with a minimal radiation dose; and
•    Simplicity, i.e. straightforward clinical procedures.

SPCR offers the perfect balance across those four “S” requirements.

What makes SPCR so efficient?

Roman: Recently, DE-CT was also introduced with a photon-counting detector, and next-generation scanners will probably be equipped with these detectors as the new standard. That improves the sensitivity and specificity of the method; however, its operational procedures remain complex in a technical sense, and the radiation dose imposed on the patient will still be relatively high. And so, we asked ourselves whether plain radiography, combined with such a detector, could be used to reduce the radiation burden and simplify the imaging process.

The proof of concept that we obtained involved building an experimental setup and using it for in vitro tests of standard calibration samples such as monosodium urate, calcium pyrophosphate, and calcium hydroxyapatite. Then, final tests involved the determination of monosodium urate in a gouty toe ex vivo. In both cases, we verified the results using a standard clinical DE-CT scanner, thus validating our hypothesis that radiography, enhanced with a photon-counting detector, could be used efficiently for CRA diagnosis.

Florian: One of the main benefits of radiography-based modalities is that they impose a significantly lower radiation dose on the patient. In our last study, we demonstrated that SPCR can be used to detect and identify CRA-related crystals both in vitro and ex vivo, with a diagnostic accuracy that is comparable to that of DE-CT but much lower radiation. The most interesting side observation of our study, however, is the increased detection limit for CRA-related crystals: we noticed that SPCR is able to detect crystals in standard phantoms of rather low concentrations (200 mg/ml), which are not detectable using DE-CT. As SPCR features higher spatial resolution than DE-CT, albeit in 2D instead of 3D, we might be able to improve the crystals’ lower detectability threshold.

How do you envision the practical use of SPCR?

Roman: Compared to DE-CT, CR imaging is a widespread and simple technique, and it is usually the first X-ray modality that a physician resorts to. Using SPCR in hospitals would rely on the same conventional apparatus that we are already using, but now equipped with a photon-counting detector that allows us to get more information. The whole process of preparing the patient and taking the image would also remain unchanged. This means that no new, complex hardware or additional staff training would be necessary.

Theoretically, SPCR could be used for any material decomposition that is currently performed via DE-CT: for example, mammography and differentiation of renal calculi could be carried out using the same machine and similar protocols. One could also envisage its use in fluoroscopy and monitoring perfusion states of organs.

From lab to patients

What are the next steps towards taking the SPCR method to hospitals?

Florian: In the long term, we would expect SPCR to become a common clinical method for diagnostic workup of arthropathies, potentially replacing DE-CT to some degree. But, before this happens, there is a lot of work to do. For now, we know that the principle behind our scientific hypothesis works. As the next step, we would like to tackle the superposition problem of objects, which is a common issue in radiography; this could be overcome by creating two orthogonal projections, as is actually standard in CR of the extremities. Furthermore, we would like to perform in vivo testing and assess its diagnostic accuracy in comparison to clinical standards.

Finally, in our recent study, in vitro and ex vivo experiments were carried out using an experimental setup that was built in-house. We have a huge incentive to replicate these measurements using professional machines, upgraded with a photon-counting detector. Ideally, one of the next steps would be to build a prototype machine with industrial partners and move it to the clinical environment. We see our initial studies as a very promising kickoff and would very much like to follow that path together with DECTRIS.

PD Dr. Roman Guggenberger and Dr. Florian Huber would like to thank all of their coworkers and collaborators, particularly PD Dr. Fabio Becce (University Hospital Lausanne).

The work of PD Dr. Roman Guggenberger, Dr. Florian Huber, and their collaborators was recently published in the Journal of Investigative Radiology. Their article discusses technical and operational details of the Spectral Photon-Counting Radiography method, as well as the results they obtained from standardized samples and ex vivo samples. Related studies, with a focus on detection of monosodium urate and calcium hydroxyapatite crystals, can be found in this article that was published in the European Journal of Radiology. 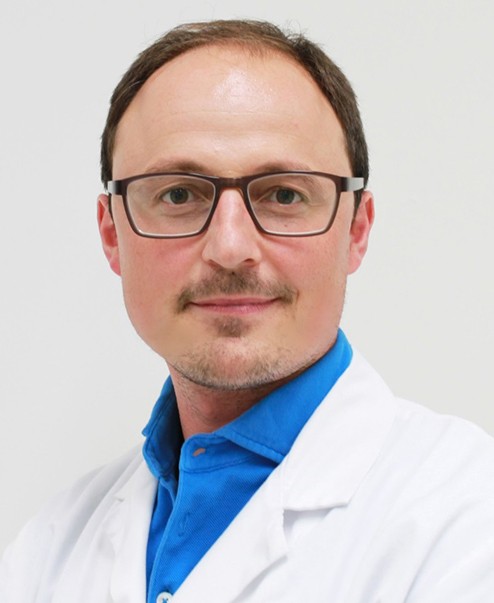 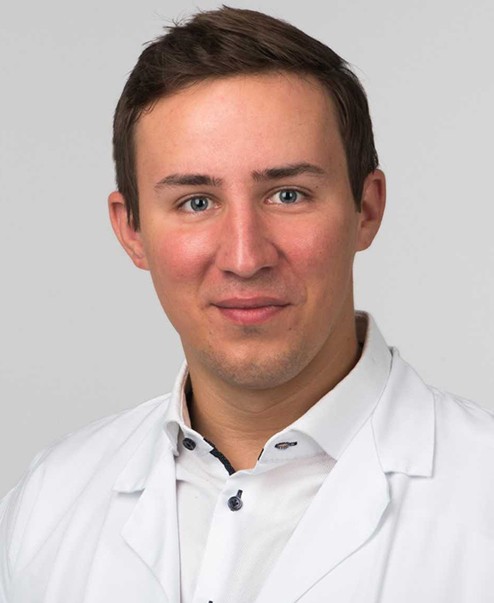 PD Dr. Roman Guggenberger studied medicine at the medical university in Innsbruck. Since 2008, he has been working at the University Hospital Zurich’s Institute of Diagnostic and Interventional Radiology, where he is a senior staff member and heads the musculoskeletal section of the department.

Dr. Florian Huber studied medicine at the medical university in Vienna. Since 2017, he has been a resident at the University Hospital Zurich’s Institute of Diagnostic and Interventional Radiology.

Dr. Spyridon Gkoumas obtained his PhD in semiconductor detectors at the University of Surrey. His postdoctoral research focused on computed tomography and mammography applications, and since 2016, he has been working at DECTRIS.

Dr. Thomas Thüring obtained his PhD in computed tomography at the Swiss Federal Institute of Technology. Since 2017, he has been working at DECTRIS.

DECTRIS is the leader in developing and producing X-ray detectors that are based on hybrid photon-counting technology. These revolutionary detectors provide direct sensing of X-ray photons — sorting all of them to the correct energy level. In medical applications, this technology has the ability to open a path to previously unknown levels of image quality, geometrical accuracy, and sensitivity with the highest spectral fidelity. Expect greatly improved X-ray medical applications, ranging from computed tomography to breast imaging!