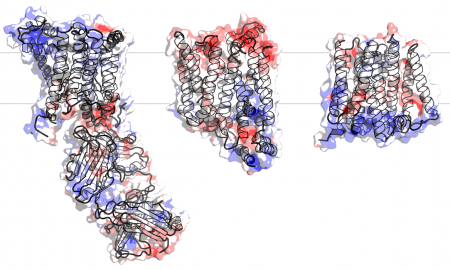 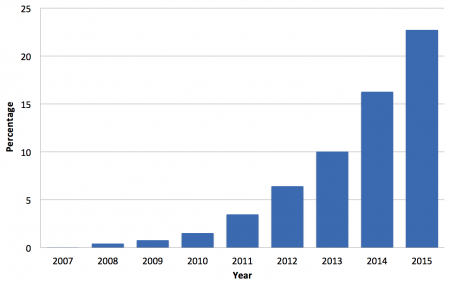 Baden, 2 Feb 2016. X-ray crystallography has long been the most potent method for obtaining high-resolution structural information on proteins, nucleic acids and their complexes. In 2014, 9628 entries were added to the Protein Data Bank (PDB) to bring the total count of released structures above 100,000. In 2015 this success continued, with again more than 9000 structures released throughout the year. But it was not just the quantity of the structures. The increasing quality is something to celebrate as well.
In 2015, 148 papers in the three journals with the broadest scientific reach (Cell, Science and Nature) presented results obtained with contributions from macromolecular x-ray crystallography. These papers contained 440 crystal structures of biologically important systems, from antibodies against human pathogenic viruses (Hashiguchi et al., Impagliazzo et al., Robinson et al., Rouvinski et al.,Scharf et al., Wu et al., Zhou et al.) to important trans-membrane transporters (Arakawa et al., Deng et al., Kato et al., Leung et al.,Lin et al., Moser von Filseck et al., Nomura et al., Perez et al., Tao et al., Wang et al.) and proteins involved in membrane fusion (Diao et al., Rostislavleva et al., Zhou et al.). We would like to congratulate all involved researchers on their achievements.
At DECTRIS, we are proud that data from PILATUS detectors is over-represented among the highest-impact research compared to the PDB overall. Whereas 23% of the coordinate sets released in 2015 were obtained from data collected on PILATUS detectors, 37% of PDB entries published in Cell, Science and Nature were based on PILATUS data. Forty-seven of the structures reported last year in these three high-impact journals were solved by experimental phasing. In this subset where the highest data quality is essential, the share of structures solved from PILATUS data is nearly 43%. Our customers know that better detectors will help them obtain better data.
It is thus not surprising that we ship increasing numbers of PILATUS3 and now also its successor, EIGER, to beamlines at synchrotrons worldwide. In 2015, we installed a PILATUS3 S 2M at beamline 14-2 of Bessy II in Berlin, Germany, and a PILATUS3 S 6M at sector 5 of ALS in Berkeley, California. We also delivered one PILATUS3 X 6M detector each to SBC-CAT at APS in Argonne, Illinois, and to beamline 11C of PLS in Pohang, Korea, but the big news for crystallographers was the arrival of EIGER at the first synchrotron facilities.
In May, two EIGER X 4M detectors were installed atbeamline BL-1A of Photon Factory in Tsukuba, Japan, in a V-shaped conformation inside a helium-filled chamber. This unusual setup will facilitate the collection of high-quality anomalous diffraction data at x-ray energies as low as 3.7 keV. The first EIGER X 16M, our new flagship detector, entered service at beamline X06SA of SLS in Villigen, Switzerland, in October.
In the two months that remained of the year, an EIGER X 16M was installed at beamline FMX of NSLS II in Brookhaven, New York, an EIGER X 9M at beamline Proxima-2A of Soleil in Saclay, France, and another EIGER X 9M at LS-CAT at APS. The EIGER X 9M at Proxima-2A produced data to solve the first novel protein structure less than a month after arrival of the detector onsite.
The future is bright for structural biology. Cryo-electron microscopy has just been named Method of the Year by the editors of the Nature journals. Electron microscopy and crystallography will be increasingly synergistic in resolving challenging targets, but crystallography is still growing and will dominate structural biology for most biological systems for the foreseeable future.