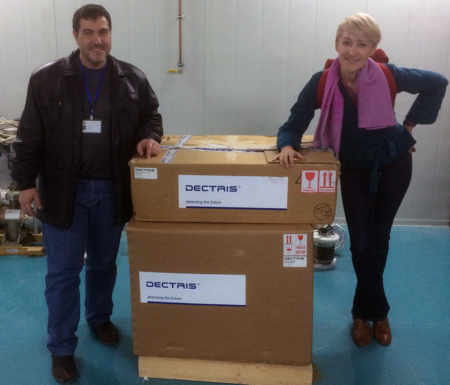 SESAME starts detecting the future with a PILATUS3 300K
SESAME is the best-known synchrotron source that is not in operation. While the electrons start to orbit in the storage ring, a gift-wrapped detector “under the tree” waits for the light.
“PILATUS3 is the first detector to arrive to SESAME. And DECTRIS is the first company to make a donation. This is excellent progress not only for the Material Science beamline, which is getting the detector, but also for the whole research center,” summarized Giorgio Paolucci, the scientific director of SESAME, during the 14th Users’ Meeting. Still, the story is more elaborate than that.
There are two remarkable aspects in the development of an international research center in the Middle East: science with its impact on the region, and the region itself. SESAME, the International Center for Synchrotron Light for Experimental Science and Applications in the Middle East, is the first center of that kind, and its political layout matches its technical complexity. Current members of SESAME are Bahrain, Cyprus, Egypt, Iran, Israel, Jordan, Pakistan, the Palestinian Authority and Turkey. The center is built in Jordan, under the auspices of UNESCO, and is supported by donations from several European synchrotron sources.
SESAME’s Materials Science beamline got its name and its wiggler from the Materials Science beamline at the Swiss Light Source [1]. A year ago, beamline scientist Mahmoud Abdellatief took over the project.
“It is an honor and a responsibility to have Materials Science as the first diffraction beamline at SESAME. It needs to serve as a true multi-purpose station, and satisfy as many users as possible,” Mahmoud reported at the European Powder Diffraction Conference (EPDIC) [2]. “We want to cover various experiments: single crystal, powder diffraction and scattering, non-ambient, time-resolved and high-resolution. But, the number of applications unfortunately clashes with our budget.”
At DECTRIS, there was not much discussion about it. The obvious idea was to donate a fast, flexible 2D detector. After all, these detectors are already successfully utilized at many multi-purpose beamines, such as the PILATUS 2M at the Swiss-Norwegian Beamline BM01A [3] and, earlier, the PILATUS 100K at beamline 711 at MAX II [4, 5]. But, future users of Material Science need more. In order to support that many applications, the angular coverage, quantum efficiency and the speed of the detector need to be as high as possible. And in order not to impose restrictions on the choice of a future diffractometer, the weight of the system needs to be low. Since the EPDIC, lots of emails have been going back and forth before the optimal solution was found. The lightweight PILATUS3 300K system, with frame rates of 500 Hz is the perfect choice for the job.
“The system was delivered to SESAME a few days before the Users’ Meeting. This made it the best meeting I have ever attended. It was wonderful to see and hear the excitement about the detector and eagerness to get the first light,” comments Dubravka Šišak Jung, application scientist at DECTRIS.
SESAME is busier than ever. While Mahmoud is looking for a diffractometer for the MS beamline, his neighbor, Messaoud Harfouche at the X-ray Spectroscopy beamline is setting up the optics. The 14th Users’ Meeting is probably the last meeting before the first light shines from the source and proves that science can trump politics. The PILATUS3 300K came right on time. We are not going to try to prove existence of Santa. Deep down, we all know the truth, don’t we? [6] We will only wish SESAME and its users a bright New Year and lots of great PILATUS3 data.
References
[1] Willmott, P.R. et al. (2013) J. Synchrotron Rad. 20, 667–682.
[2] Abdellatief, M. et al. (2016) “The SESAME Material Science Beamline”, 14th European Powder Diffraction Conference.
[3] Dyadkin, V. et al. (2016) J. Synchrotron Rad., 23, 825.
[4] Martinez-Casado, F. et al. “Set-up for medium and high resolution powder diffraction (Ror rietveld refinement) and fast in situ studies” European Powder Diffraction Conference, 2016.
[5] Matěj, Z. et al. “Experimental advantages of Scanning 2D Pixel detectors for XPD ” European Powder Diffraction Conference, 2016.
[6] Oléron Evans, T., Fry, H. (2016) “The indisputable existence of Santa Claus (The mathematics of Christmas)”