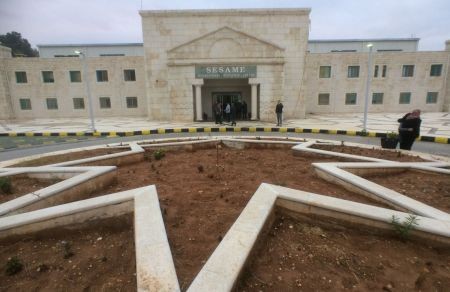 The story of SESAME is about science, politics, tolerance and fighting all the odds. It is one of these stories that you could read in one breath, making you happy, excited… and sad. And it is no spoiler if we reveal that it has a happy end... or to put it in better words - a happy start.

SESAME (Synchrotron-light for Experimental Science and Applications in the Middle East) probably started in 1993, with what was called “naïve idealism” to build a synchrotron in the Middle East. The synchrotron would bring high-level science to the region, and shift the political and social focus to new developments. Obviously, the idea had many strikes against it: the political situation in the region, finances, infrastructure and a lack of highly skilled staff to carry out such a demanding task. But, as the Japanese proverb says “the day you decide to do it is your lucky day”. The “naivety” was spreading through the region and beyond, gathering UNESCO, CERN, synchrotron sources, observers and the member states: Cyprus, Egypt, Islamic Republic of Iran, Israel, Jordan, Pakistan, the Palestinian Authority, and Turkey. Though, the journey was not exactly a streak of luck. The project encountered financial problems when the international banking sanctions were imposed on Iran, in 2009 and 2010 two Iranian scientists working on the project were killed, and in 2014 the facility’s roof collapsed under the unexpected snow in Jordan. But the project and its spirit survived and it goes on, receiving support from scientific institutes, governments, colleagues, and international organizations.
We at DECTRIS know about counting. But it is impossible to count in all contributions to the project: from the Council and technology experts to the cleaning staff. So, today we are proud that Switzerland is one of the members observers, and that the components for the Material Science beamline were donated by the Swiss Light Source at Paul Scherrer Institute, where we have our roots.  And, most of all, we are happy for providing one important piece to the great scheme of things: the PILATUS3 300K detector, the eyes of the Material Science beamline.

“As scientists, we are excited about the Opening Ceremony, but more so about the upcoming first light and the first users, especially at Material Science and Macromolecular Crystallography beamlines.  We wish you a great start and countless photons”, comments Christian Brönnimann, the CEO.

16.05.2017 is the day when H.M. King Abdulla II of Jordan, Irina Bokova, the Director-General of UNESCO, Chris Llewellyn Smith, the President of the SESAME Council, Swiss diplomats and many others meet in Allan to cut the ribbon. Let there be light soon.