There are several ways of collecting the diffraction data required to solve a structure by X-ray crystallography. The most immediate is the home laboratory, but many projects require higher performance than a laboratory provides. At synchrotrons, where these resources exist, users can go to collect data in person, or they can send their crystals and control the beamline from a computer from where they live or work. Remote data collection is becoming increasingly popular because it provides the same user experience as does data collection on site, except it's more comfortable.

Fully automated beamlines take the power and comfort of remote data collection to the logical next level. Avoiding human error caused by tiredness and tedium, they promise consistent and reproducible data quality. Early examples are the LRL-CAT beamline at Advanced Photon Source and beamline 12-2 at the Stanford Synchrotron Radiation Laboratory. Beamline I04-1 at Diamond Light Source can also be run fully unattended. This is done primarily for ligand screening campaigns.

Opened in September 2014, the MASSIF-1 beamline at the European Synchrotron Radiation Facility (ESRF) is the world's first beamline designed from the ground up for fully automated operation. Precision motors transform a standard 6-axis industrial robot into a combined sample changer and goniometer. Automated data processing and analysis routines feed into a database that presents results to the user. Sophisticated protocols make the individual parts of the beamline come together as a whole and ensure reliable recognition of errors and subsequent recovery of a functional state.

On previous automatic beamlines, crystal centering was performed optically, with no way to correct for lens effects of the loop. On MASSIF-1, only the sample support is identified optically. The crystal itself is located and characterized by diffraction. This has three main advantages. The crystal volume most suitable for data collection can be identified by diffraction cartography, the crystal is guaranteed to remain in the beam during the experiment, and the permissible dose can be calculated based on crystal volume, ensuring best data before radiation damage sets in.

Figure 1. Beamline MASSIF-1 at ESRF. The detector, the dewar that holds 240 samples, the sample changer and the beam are shown (left to right). As the goniometer is part of the robot, there is no separate goniometer head. Photo courtesy of Matthew Bowler, ESRF.

X-ray centering depends on reproducible sample positioning and a fast detector. MASSIF-1 uses a PILATUS3 X 2M that can acquire up to 250 images per second. "Half of the six minutes it takes to measure the average sample is spent centering the crystal," explains Matthew Bowler, Beamline Scientist at MASSIF-1. "Full automation just wouldn't be feasible with a slower detector." Centering by diffraction depends on the scoring of images based on radial intensity above background, impossible on anything but a noise-free detector like PILATUS3.

How do crystallographers react to their precious samples being taken from them and exposed to X-rays without their oversight? "The service has now been running for 3 years and is proving very popular," says Bowler. "We have now processed over 35,000 crystals, and many structures have been solved de novo by SAD." The quality of automatically collected data is often better than that of data collected by human experts and untainted by sleep deprivation and bungled circadian clocks.

While MASSIF-1 accepts all kinds of samples, it really shines when repetition is highest. It will tirelessly screen hundreds of poor crystals to identify the few that diffract to high resolution. It will then, without breaking for lunch, collect hundreds of datasets of crystals soaked with a large library of compounds or fragments to help the user identify ligands. "It is such a waste to stay up for 24 hours to collect data," says Bowler. "This time can be used much better to find answers to the underlying biological questions."

Bernhard Rupp, leading a small structural biology research team at the Medical University of Innsbruck, Austria, knows that his latest success, published in the journal Structure this week, wouldn't have been possible anywhere else. "Without the screening of 348 crystals on MASSIF-1, we would not have been able to determine the afamin structure," he says. "We obtained twenty indexable data sets, only two of which lead to the determination of the molecular structure of this complex plasma glycoprotein and lipid transporter." 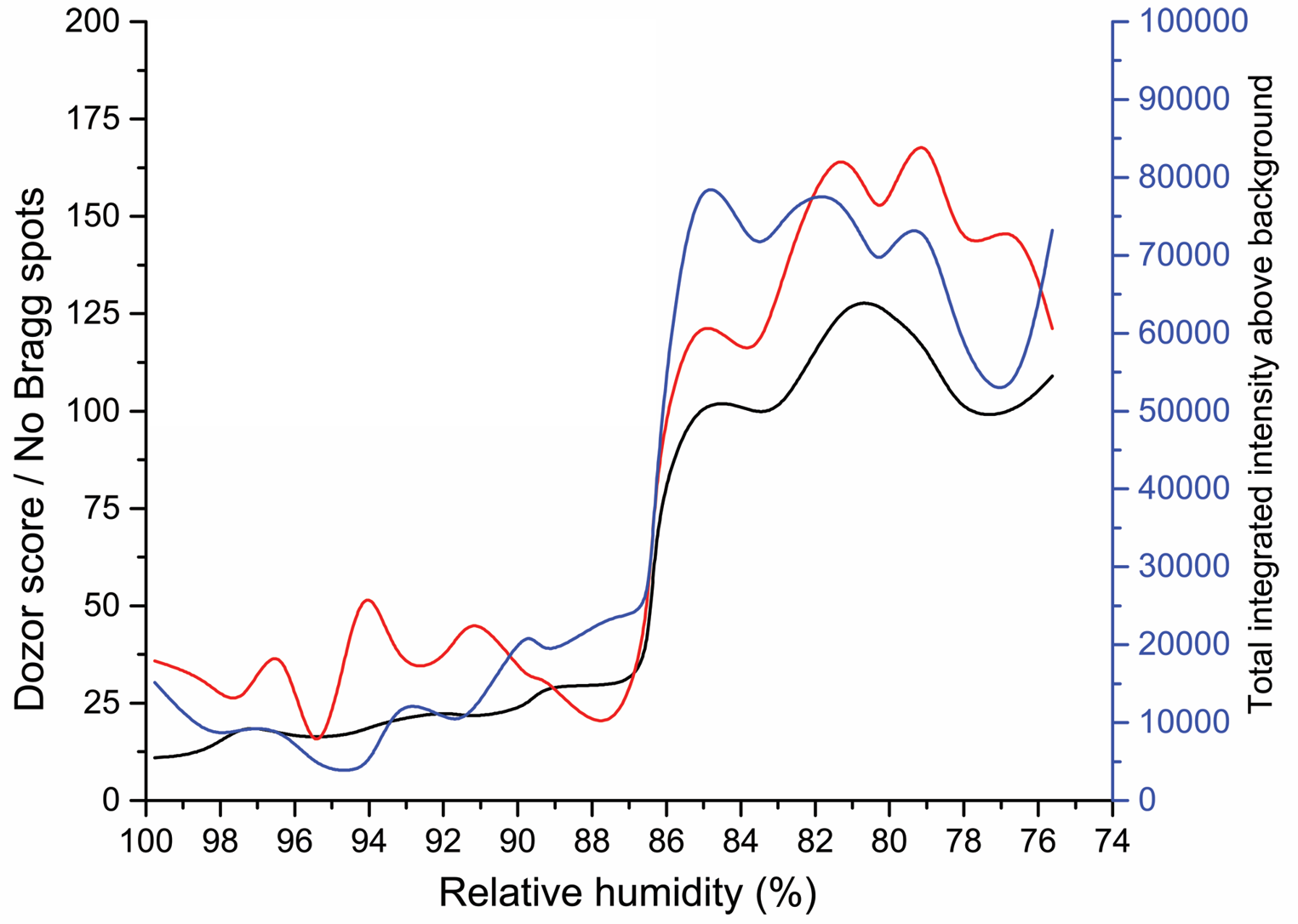 Figure 2. Improved diffraction of afamin crystals upon dehydration. Going from above 88% relative humidity to below 86%, three measures of diffraction increase dramatically. The number of Bragg spots is shown in black and the Dozor score, based on the intensity as a function of resolution, in red (scale on left axis). The total integrated intensity above background is shown in blue (scale on right axis). Photo courtesy of Bernhard Rupp, Medical University Innsbruck.

MASSIF-1 is democratizing data collection. While extensive screening has been done in the past (some structures in the PDB required assembly of a complete dataset from hundreds of fragile crystals), these efforts depended on large numbers of students and postdocs doing the work. Now smaller labs can be just as ambitious and achieve this scale by employing automation and robotics.

But MASSIF-1 goes beyond simple screening. The HC-1 humidity control device is available at the beamline. "Dehydrating the crystals into an orthorhombic form with improved diffraction which was crucial for the structure determination," says Rupp, "and it was done automatically." Just recently, the beamline's capabilities have been further expanded by the addition of pseudo-helical data collection.

There's no doubt that automated data collection will grow. The advantages are undeniable. With the introduction of EIGER2, DECTRIS has the detector for fully automatic beamlines at fourth-generation synchrotrons. Collecting at a higher frame rate with better signal-to-noise ratios than existing PILATUS detectors, an EIGER2 would increase turnover – all the while collecting better data.