In the service of Bragg

Divisions run deep through crystallography. There's small molecules and there's proteins. By convention, the two don't mix and the practitioners rarely talk. Then there's powder X-ray diffraction, which studies crystals but doesn't advertise it. The one thing these three fields have in common is Bragg's Law.

The X-ray crystallography facility at the University of California, San Diego (UCSD), doesn't know divisions, boundaries or limits. Housed on the fifth floor of Urey Hall, local brutalism's crowning moment, it contains nine diffractometers and two crystallographers with open minds and extensive skills. The sign on the door says small-molecule crystallography, but Curtis Moore, the facility's director, and Milan Gembicky, its application scientist, study all crystals, from the smallest of small molecules over large and fragile metal-organic frameworks to protein complexes. They work on powders and thin films as well. If a sample gives Bragg reflections in an X-ray beam, they will analyze it. 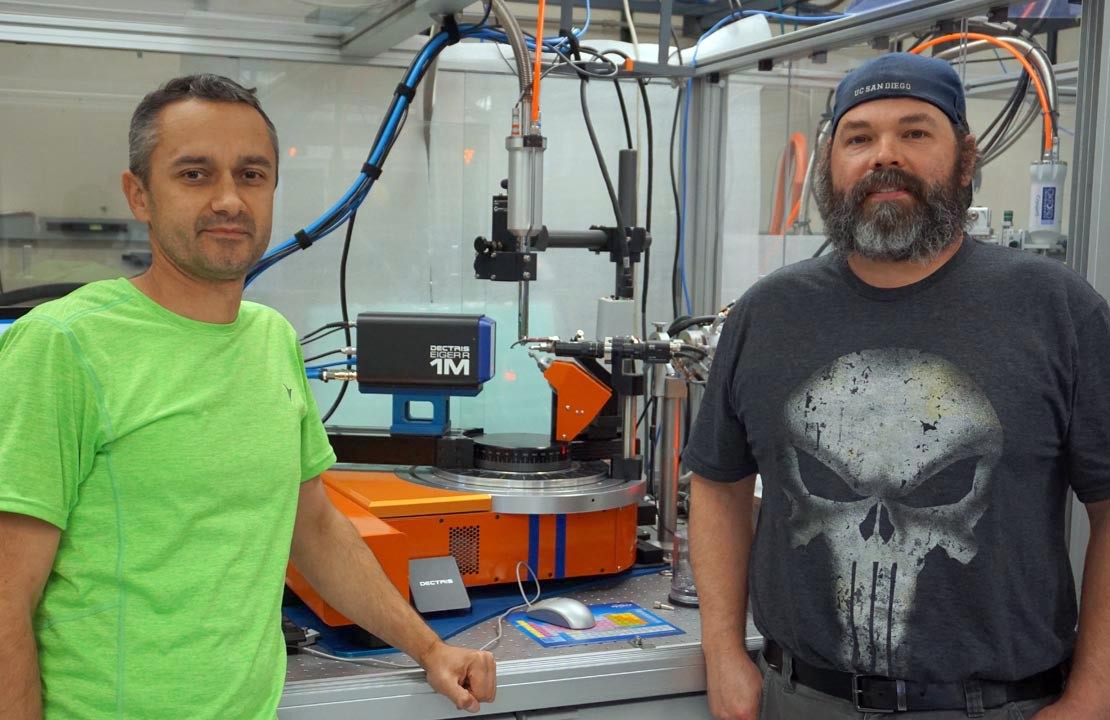 When the facility fires on all cylinders, it goes through 1000 l of liquid nitrogen a week. A steady stream of students and postdocs arrives at the facility, crystals in hand. The instruments are configured for easy operation, and users need only minimal support to run their experiments. This leaves Moore and Gembicky to look at particularly challenging samples and samples provided by local pharmaceutical companies. In one of their brightest moments, collaborating with researchers at The Scripps Research Institute, they showed that it was the wrong structure of a promising compound in phase 3 trials that was patented. Though lengthy legal battles lie ahead, the researchers have filed for a patent for the correct compound.

It doesn't say so anywhere, but what Moore and Gembicky are really doing is experimental crystallography. Gembicky used to work for a large diffractometer manufacturer and can repair, rebuild and upgrade anything in the lab. There are cabinets full of spares and tools everywhere. Gembicky's browser keeps refreshing eBay searches for rare parts, but he also keeps an eye on new technological developments.

Early last year, both had the chance to test an EIGER R 4M when they received a loan for a few weeks. Even though their goniometer wasn't built for it, Gembicky had things working in no time. All it took was an adaptor plate from the machine shop and cable for the trigger signal. Moore didn't want to affront their guest with an impossible challenge but needed to know what Hybrid Photon Counting was capable of. He turned to crystals of a europium-containing compound that had defied earlier efforts at structure solution. 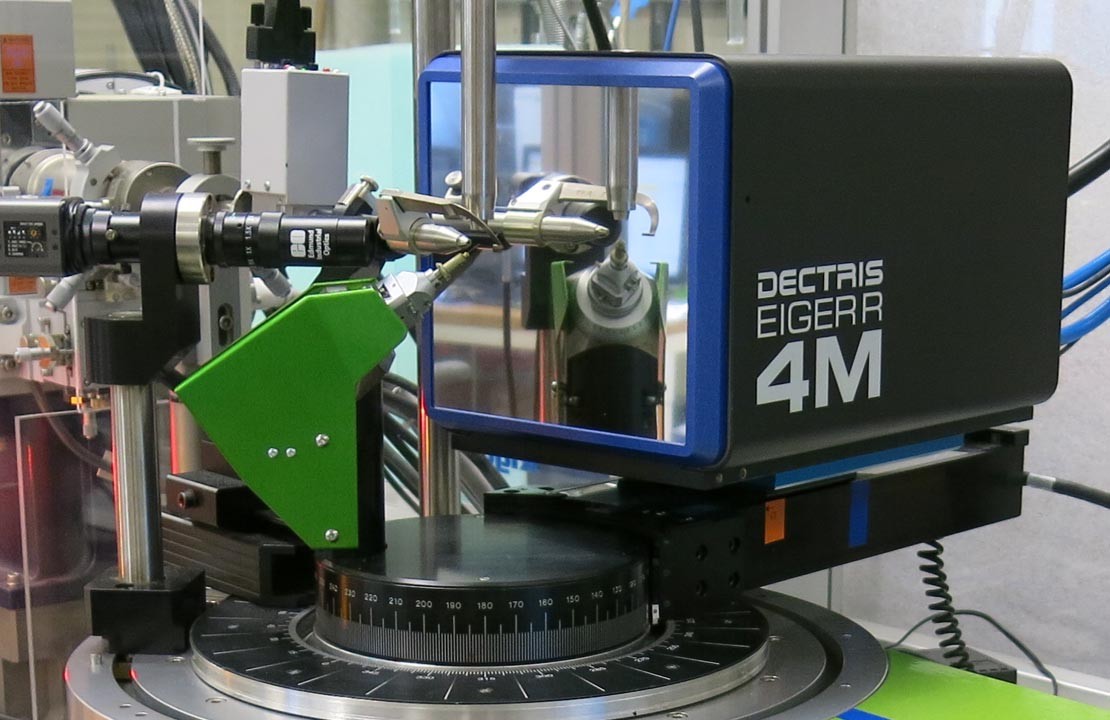 EIGER R 4M during its brief visit to the lab (image courtesy of M. Gembicky)

Europium fluoresces at 5.8 keV and floods integrating detectors with spurious background. With the detection threshold of EIGER set to 6.2 keV, this source of noise is cut. Moore and Gembicky quickly obtained beautiful data that allowed them to solve the structure in a straightforward manner. 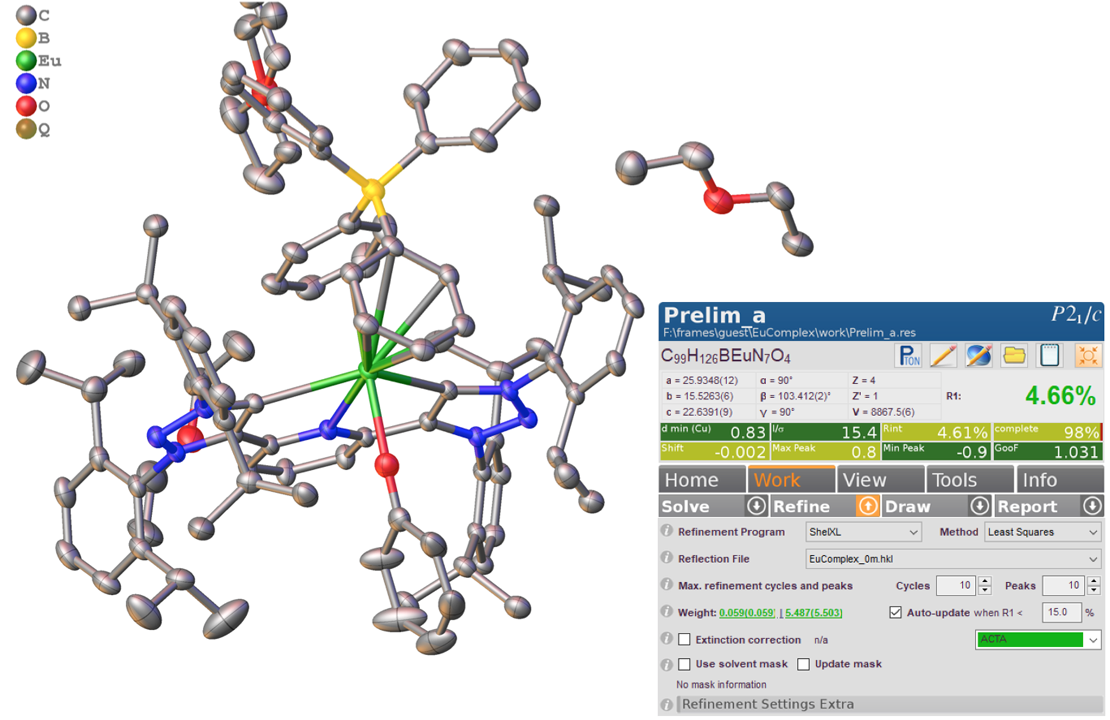 Structure and refinement statistics of the europium-containing molecule (figure created with Olex2).

Moore and Gembicky returned the loaned EIGER R 4M with a heavy heart, but in the meantime gleaned enough spare cash to acquire its smaller brother, the EIGER R 1M. The detector has been operational since March, and even though the flow of data from the detector to the processing software could be improved by using the Stream interface, Moore and Gembicky work productively and see no need for immediate changes. Thanks to an optimized goniometer geometry, they reach a resolution of better than 0.84 Å even with Cu-Kα radiation. 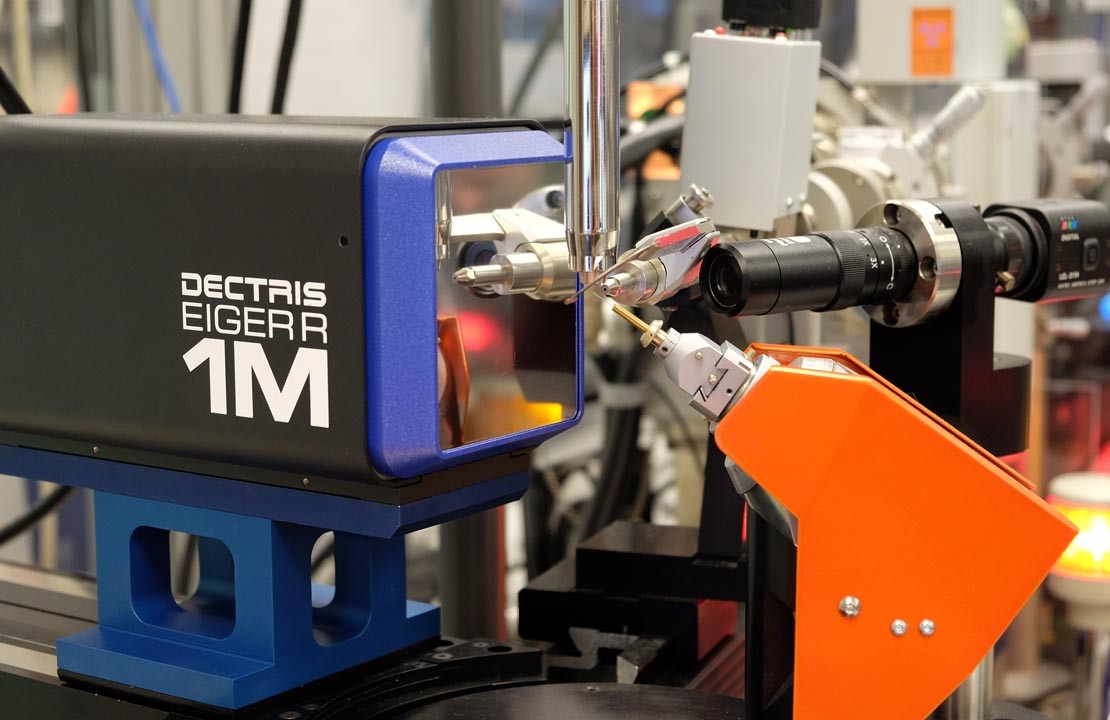 The EIGER R 1M is now available to all users of the X-ray facility. As the detector collects noise-free data and sits atop a powerful rotating-anode generator, it's best for weakly diffracting samples. "Anyone can solve easy structures. With EIGER, we can solve challenging structures more easily," says Moore. Users comply and bring protein crystals or delicate MOFs, or even tiny small-molecule crystals needing ten-minute exposures to reach a resolution of 1 Å. On most other instruments, standard small-molecule crystals are run, but one quickly rotating loop contains microcrystals that give beautiful powder rings. There are Bragg reflections everywhere.