G protein coupled receptors (GPCRs) are key modulators of human physiology. These membrane proteins relay signals from the environment and cause cellular responses. A large share of marketed drugs acts by binding to GPCRs.

Recently, the range of marketed drugs has grown in certain jurisdictions to include cannabis. While it is often used recreationally, cannabis also has medicinal purposes and its primary active ingredient, Δ9-tetrahydrocannabinol (THC), holds promise as a candidate for pharmaceutical development. It has wide-ranging effects on memory, mood, pain, inflammation, and appetite.

THC binds to the cannabinoid GPCR CB1, the most abundant receptor in the brain. Its physiological ligands are endocannabinoids that modulate neurotransmission. For derivatives of THC to become therapeutic agents, the biology of the endocannabinoid system has to be understood better. Without structural information about cannabinoid receptors, the molecular details of ligand binding are still largely unknown.

At the end of last year, two papers appeared in quick succession that fill this gap. First, a group around Ray Stevens from the Bridge Institute at the University of Southern California, Los Angeles, and the iHuman Institute at ShanghaiTech University published the structure of CB1 in complex with the agonist AM6538 (Hua et al.). Recently, a group led by Dan Rosenbaum from the University of Texas Southwestern Medical Center in Dallas added the structure of CB1 in complex with the inverse agonist taranabant (Shao et al.).

Getting there was not easy. Membrane proteins like CB1 are notoriously difficult to isolate. Both groups worked with CB1 constructs with a stabilizing domain inserted in one of the intracellular loops of the receptor. Crystals were grown in lipidic cubic phase.

The Rosenbaum group collected data at the GM/CA beamline at Advanced Photon Source where effective data collection on microcrystals is possible. The two end stations are equipped with a PILATUS3 6M and an EIGER X 16M, respectively. "Both detectors have given us a significant boost in signal at high resolution relative to the previous CCD detectors", says Rosenbaum. He adds, "the EIGER detector that we used for CB1 worked very well, similar to the PILATUS we had previously used but perhaps with a slightly better signal-to-noise for our samples."

Reflecting the difficulty of the project, data from crystals of CB1 in complex with AM6538 were collected at a number of synchrotrons. "We currently get excellent data from SPring-8 consistently", says Stevens. Not only is beamline BL41XU finely tuned with strong support, it also provides a fast PILATUS3 6M detector. 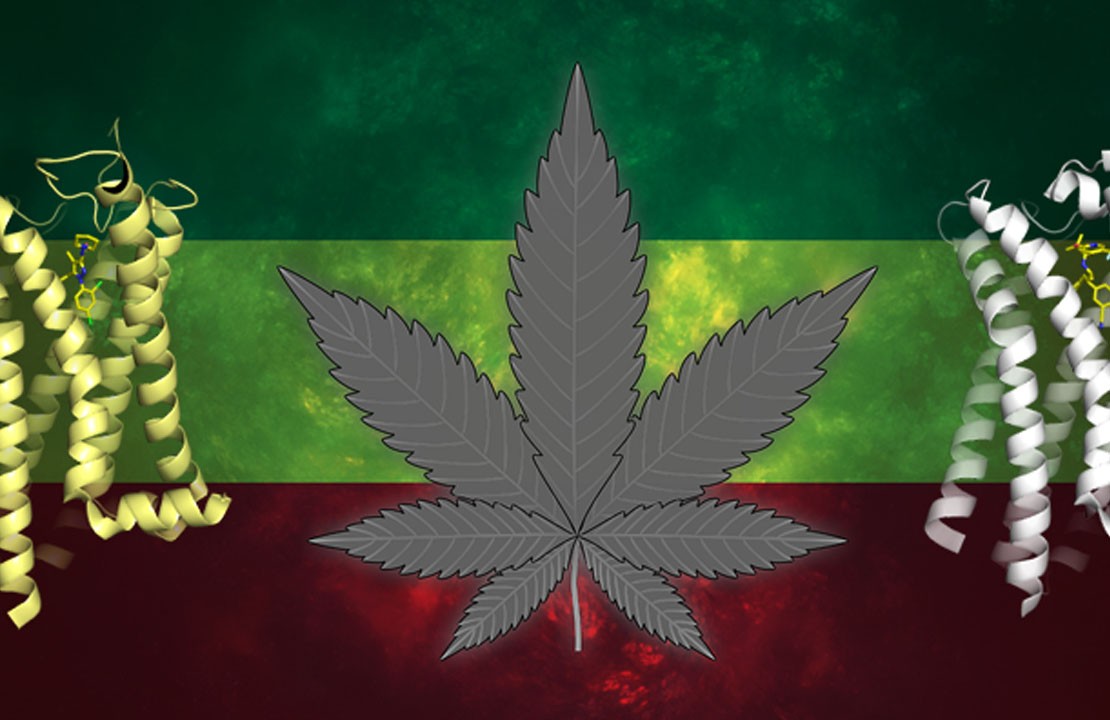 Figure 1. The structure of cannabinoid receptor CB1. The structures of CB1 in complex with AM6538 (left, PDB code 5TGZ) and taranabant (right, PDB code 5U09) are shown as cartoon representations. The ligands are shown as yellow stick models. The extracellular side of the membrane (indicated by the light green bar) is up. A cannabis leaf is shown in the center.

The two structures of CB1 dramatically advance our understanding of the interactions of small molecules with the receptor. While the structures show the receptor in its inactive conformation, the binding pocket for THC and endogenous ligands could nevertheless be modeled. This information will aide the development of new candidate drugs with fewer side effects. Until then, if you want to stimulate your research, EIGER is a safer bet than THC.