High resolution in situ PXRD studies in a lab? In two shots, please!

When it comes to the tailored design of organic materials, inducing a physical or a chemical change with non-ambient conditions is a hot topic. Not only does this provide new paths for exploring the energy landscape, but it also allows chemistry to be green. In situ monitoring of temperature, pressure or mechanically induced phase transformations is the ultimate dream, as it provides exact information about the conditions at which a certain phase occurs [1,2].

The transformation in this story is simple, and hardly anyone would think it worth a trip to the synchrotron. Adenine exhibits two polymorphs, and at high temperature one irreversibly converts into the other [3]. So why would anyone monitor this in situ? It turns out that the structures of both polymorphs feature layers, which makes their powder X-ray diffraction (PXRD) patterns similar. Consequently, polymorph mixtures are difficult to resolve even with synchrotron radiation. Could there be another phase in between? Can we detect it and identify it using a home diffractometer?

Needless to say, such a high-resolution in situ diffractometer has many conflicting requirements. While the monochromator provides a pure Kα1 line, it cuts down the flux. Although the photon loss can be compensated with increased exposure time, this hampers the temporal resolution. A high angular coverage requires scanning, but this takes time. At synchrotron sources, these problems are overcome with multi-modular MYTHEN detectors, but these systems are too bulky for the lab [4,5,6,7]. Once DECTRIS launched the compact and budget-friendly MYTHEN2 series, STOE seized the opportunity to build a multi-modular system for a lab. But, instead of minimizing the distance between neighboring modules, STOE decided to use it as an advantage. The gap was adjusted to the to the angular coverage of a single module, which opened up two data collection strategies:

With these strategies, complete high-resolution patterns can be collected with no or minimal temporal inconsistencies between low and high 2θ angles.

STOE’s high-resolution in situ setup for the adenine study included the MYTHEN2 R 2K, a Mo source, a Ge monochromator and and the newly developed STOE INSITU HT2 oven, all installed in a Stadi P in Debye-Scherrer geometry. This setup allowed high-resolution data (dmin = 0.6 Å) to be measured in two exposures of 12 minutes each, throughout a wide temperature range (Fig. 1b). Subsequent parametric Rietveld refinement converged with good Rp values (2% to 5%), and confirmed the known: increasing the temperature induces a gradual transformation of phase I to phase II. But, surprisingly, at temperatures higher than 380° C phase II transforms into a previously unknown phase, characterized by a single peak. And there it was, phase III, a new polymorph featuring disordered layers. However, something did not seem right. 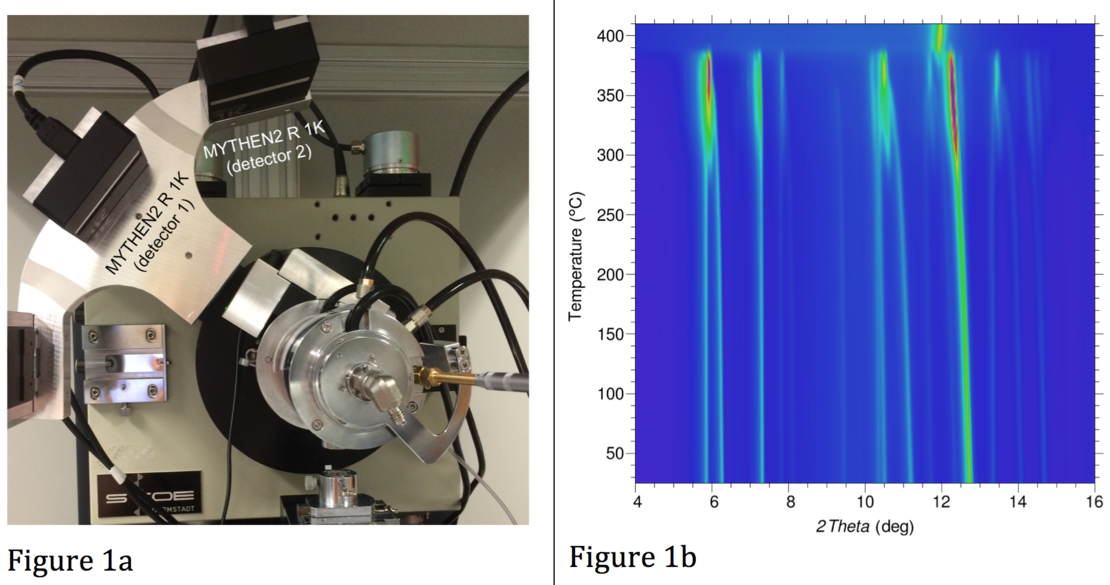 Figure 1. PXRD data collection in the laboratory. (a) The MYTHEN2 R 2K system used for the measurement. (b) Low-angle region of PXRD pattern collected between 25 and 410°C.

The beauty of the high-resolution data lies in its self-sufficiency, as it asks for little or no assumptions. Once each pattern was carefully examined, the situation was clear: several high-temperature patterns showed signals (Fig. 2, red arrows) that an inexperienced eye or automatic refinement might mistake for noise. As it happens, these weak signals could be indexed with a triclinic cell, which belongs to yet another previously unknown adenine polymorph. This polymorph, phase IV, appears shortly before the system converts to phase III [8].

Were the two additional phases of adenine worth the effort? Yes! The experiment not only confirmed that the simplicity of a system such as adenine can be deceiving, but also proves how important high quality data is for in situ studies. We are ready to redefine the standards for quality: monochromatic radiation, Debye-Scherrer geometry, and a minimal number of steps in data collection are the key prerequisites. STOE got it right: highest angular and diffraction resolution, obtained in a single shot or a single-step scan.