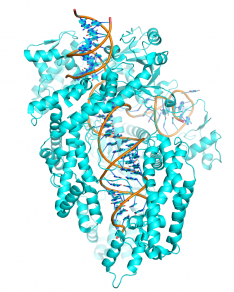 Baden, 6 May 2016. Targeted cleavage of foreign DNA by CRISPR-Cas plays a key role in adaptive immunity in certain bacteria. The Cas9 endonuclease introduces double-stranded breaks in viral DNA to protect the bacterium from infection. It gets its specificity from short RNA sequences derived from viral DNA obtained during earlier infections.
CRISPR-Cas is currently one of the hottest topics in biology because of its promise as an easily programmed and highly specific genome-editing tool that works in a wide range of target organisms. In contrast to earlier tools like Zn-finger nucleases, CRISPR splits recognition and cleavage in two separate units. Recognition by the nuclease is mediated by RNA sequences that can be tuned to provide exquisite precision at a fraction of the cost of earlier approaches.
The major weakness of Cas9 nuclease is its requirement for two different RNA molecules, a guiding crRNA and a trans-activating crRNA. Last October, a related nuclease that relies on one RNA molecule onlywas identified in a number of bacterial species. Called Cpf1, it has been subject to frenzied study since then. Now, the first major results have been published.
Last week, a paper in Nature showed that Cpf1 excises crRNAs from CRISPR repeats and can use them as specificity signal to introduce double-stranded breaks in target DNA. This makes it the most minimal CRISPR-Cas system known to date and an exciting prospect for biotechnological and medical applications. In the same issue of Nature, the crystal structure of CRISRP-Cpf1 in complex with crRNA was published - solved from data collected with a PILATUS3 6M detector.
Today, a paper in Cell reported another milestone, the structure of CRISPR-Cpf1 in complex with crRNA and target DNA. The data were collected at Swiss Light Source in February using an EIGER X 16M detector that had been operational for only a few months. Takanori Nakane, a computational crystallographer and one of the coauthors of the paper, processed the data using DIALS, a software package specifically developed for the processing of low-background data from HPC detectors and the first package that can read EIGER data directly. "At first, I encountered several problems", said Nakane, "but the developers swiftly fixed them. DECTRIS was also very helpful and quick with technical information."
The structure was solved by experimental phasing by single-wavelength anomalous dispersion, a method whose success critically depends on the accuracy of the measured intensities. With smaller pixels than PILATUS and more flexibility when it comes to fine-phi slicing, EIGER records data of superior quality. Another advantage of the detector is the high frame rate. "This enabled us to collect datasets from a large number of crystals and choose the best one later", said Hiroshi Nishimasu, another coauthor of the paper.
Nishimasu, Nakane and other members of Osamu Nureki's laboratory at the University of Tokyo are excited that the Japanese synchrotron SPring-8 has installed an EIGER X 9M detector at beamline BL32XU. "Most of our data will be collected on DECTRIS detectors, both for membrane proteins and soluble proteins", concludes Nakane.
DECTRIS is proud that EIGER contributes to a better understanding of CRISPR-Cas. The technology has already been used to attenuate human pathogens and genetically engineer crops and livestock in the laboratory but, says Clemens Schulze-Briese, CSO of DECTRIS, "more structural and functional work is required before the technology can be deployed safely for what is arguably its greatest promise, gene therapy of devastating human diseases." With EIGER detectors being installed at beamlines all over the world, that goal is now within closer reach.