Over the last 50 years, the development of medical X-ray Computed Tomography (CT) has been driven by two needs: to obtain better images and to lower the radiation dose that is imposed on the patient. Contemporary research in the field tackles these problems from three sides: investigating new contrast agents, designing microCT systems that are based on new technologies, and developing algorithms for data processing.

Contrast agents are substances that are introduced into the patient’s body to highlight particular blood vessels, tissues, organs, or lesions. Iodine is a commonly used agent, but it finds its limit when its attenuation factors and those of the tissue being investigated are similar, or when dynamic or multiphase imaging is required. One of the ways to overcome these limits is to introduce a secondary contrast agent, and the subsequent material decomposition can be achieved using an X-ray detector that features multiple energy thresholds. This is exactly the approach that Carlo Amato from the German Cancer Research Center (DKFZ)’s Division for X-ray Imaging and CT  used in his recent work. We sat down with Carlo to discuss how new contrast agents are researched using a custom-made animal micro-CT scanner that is equipped with a hybrid-photon-counting X-ray detector. 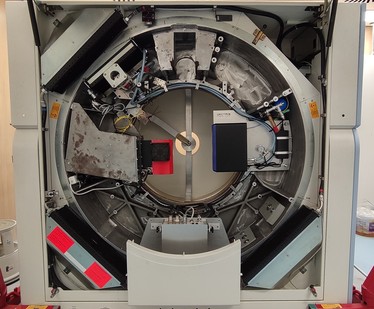 Custom-made animal MicroCT scanner developed at DKFZ features a single X-ray source and a prototype of a DECTRIS X-ray detector.

1. The challenge of multiple contrast agents

DECTRIS: Why is there a need to perform CT with multiplecontrast agents?

Carlo Amato, PhD student at the German Cancer Research Center: It is not surprising that iodine has been the most widely used contrast agent throughout the history of medical CT: it is a heavy element that provides good contrast, and it is highly biocompatible. But there are several cases where this is notsufficient, since the k-edge of iodine is at too low of an energy compared to the X-ray spectra that are deployed in clinical CT. Imagine a case where you need to identify calcified plaques (causing stenosis) with CT images. Using an iodine-based contrast agent and standard CT, only gray-scale images (Hounsfield units) are generated, and calcified plaques can become invisible if the attenuation coefficients of iodine and the tissue being investigated are the same. Here, it will be important to introduce a contrast agent with a different k-edge in order to discern blood.

Another example is multiphase imaging of the liver, where we want to discern arteries and veins at two different points in time. Nowadays, this is done by injecting iodine and then taking several CT scans. If we were to introduce two different contrast agents at different times, we would have one in the arterial system and the other one in the vein system, and we could spare the patient an extra CT scan.

So far, the use of multiple contrast agents has not been possiblebecause of two things: the limited availability of contrast agents and the difficulty of performing simultaneous material decomposition in a conventional CT scanner. Our group tackles the problem from all sides: researching new agents, using a new X-ray detection technology, and developing data-processing algorithms. We have a great international project with partners that include providers of contrast agents (NanoPET) and developers of hybrid-photon-counting X-ray detectors (DECTRIS).

DECTRIS: Your recent work focuses on using bismuth as a secondary contrast agent and distinguishing it   from iodine using an X-ray detector that has multiple thresholds. How did this work?

Carlo: Our research is focused on using bismuth as a secondary contrast agent because of its high atomic number. As the type and amount of a contrast agent relate to the radiation dose that is imposed on a patient, we kept the initial concentrations of contrast agents to a standard 300 mg/mL.

The setup we used for the material decomposition included an X-ray microsource, which was operated at 60-100 keV, and a prototype of a DECTRIS X-ray detector. This X-ray system is built on hybrid-photon-counting technology and features four energy thresholds: that is, it has spectral capability. By using two of those energythresholds, we were able to discern iodine and bismuth. This resulted in two data bins with good statistics.

2. Combining a custom-made MicroCT scanner with a hybrid-photon-counting detector

DECTRIS: Can you tell us about the custom-made animal MicroCT scanner that you have built?

Carlo: The idea was to construct an advanced animal MicroCTscanner, which would allow us to investigate a   variety of contrast agents. We opted for a single source, a DECTRIS detector prototype, and software we developed in-house. Constructing such a MicroCT scanner was a comprehensive experience, as it included software, hardware, and mechanical considerations. However, we did not start from scratch: we were refurbishing an old Siemens CT instrument. We had the idea to introduce rotating joints, as well as a mouse-sized moving table that slides in and out of the gantry. The gantry can spin at a speed of up to 2 seconds per rotation, so perhaps one of the challenges was to trigger the system to read the angle of the gantry and start the acquisition.

The integration of the X-ray detector was not problematic. The provided software was useful, and we also had Dr. Thomas Thüring (DECTRIS) to help us. Though I need to say that designing a cooling system was interesting, as we had to figure out how to cool the system in a rotating gantry.

We ended up with a flexible gantry. The focal spot is 80 μm at 90 kV, but it can go to 20 μm if the power of the tube is reduced. Depending on the contrast agent we are using and the desired exposure time, we are operating the gantry at voltages between 40 and 110 kV. Last but not least, our X-ray detector allows us to do both static and dynamic experiments.

DECTRIS: For your studies, you are using a prototype of a hybrid-photon-counting X-ray detector with four thresholds. Are there any other benefits of this technology?

Carlo: One of the advantages of the hybrid-photon-counting technology is that it allows for development of X-ray detectors with smaller pixels than the ones that are currently in use. The other thing is, of course, spectral capability. Here, the more thresholds the X-ray detector has, the more materials can be discerned simultaneously. We are currently using two out of the four thresholds because we are focused on two contrast agents.

Our X-ray detector has a frame rate of 200 Hz, which is more than sufficient for our current experiments. Currently, we are not focused on dynamic experiments, so we are running the detector at 65 Hz. However, we are interested in using the higher frame rate in two cases: for optimizing coronary imaging procedures, and for developing a motion compensation algorithm to correct for movements of the patient during data acquisition.

3. On a path to a material decomposition of multiple contrast agents

DECTRIS: How is your animal MicroCT scanner used in practice?

Carlo: We are using the gantry in many applications. For example, it is used for testing new contrast agents on mice in order to examine their safety and applicability for preclinical use. The questions we want to answer relate to the dynamics and kinetics of a contrast agent: for example, how long it stays in a body, what its half time is, and what its uptake place is. Currently, we are mostly focused on the new bismuth contrast agent, which has been developed by our partner NanoPET.

DECTRIS: What are the next steps in your research?

Carlo: We are very excited about using our newly built animal MicroCT scanner to examine new contrast agents and their combinations. We would like to use multiple (more than two) contrast agents and see what can be achieved in a single scan. The idea is to use multiple thresholds and develop an algorithm for obtaining high-quality data at a minimal radiation dose for the patient. With our collaborators NanoPET and DECTRIS, we are on a good path toward our goal. When you have the right partners, things work!

Carlo Amato (born 1993) achieved his Bachelor’s degree in Physics with a thesis on dynamic nuclear polarization in magnetic resonance (2015, University of Pisa, Italy). An increasing interest in Applied Physics, especially medical physics, brought Carlo to the German Cancer Research Center (DKFZ), where he began his Master’s thesis on using helium beam radiography for image-guided radiotherapy. After graduation (2017, University of Pisa), he came back to the DKFZ as a PhD student. Currently, he is investigating novel contrast agents for applications in photon-counting CT under the supervision of Prof. Dr. Marc Kachelrieß. 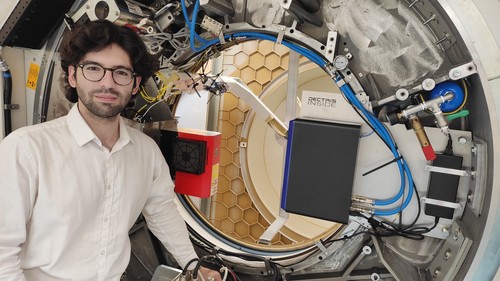 Carlo Amato in front of the microCT scanner at the DKFZ.

The DKFZ’s Division of X-ray  Imaging and Computed Tomography aims to improve  X-ray and CT imaging in all aspects, but with a special focus on cancer detection and tumor characterization. Although calibration, preprocessing, and dose reduction apply to both radiographic and tomographic imaging, sophisticated image reconstruction and artifact reduction techniques are the team’s points of focus in CT research. This includes developing newmethods to perform real-time imaging and radiation treatment simultaneously, potentially combining the information that is obtained by the kV imager with the portal images that are obtained from the MV treatment beam developing new registration and reconstruction algorithms to compensate for patient motion, as well as developing new multispectral imaging techniques to improve tumor diagnosis and allow for quantitative decomposition of tissue into its dominating chemical components. Furthermore, some of their projects aim to translate and adapt methods that were originally developed for CT to other imaging modalities, such as MRI and PET.

DECTRIS is the global leader in developing and producing X-ray detectors that are based on hybrid-photon-counting technology. These revolutionary detectors provide direct sensing of X-ray photons –  sorting all of them to the correct energy level. In medical applications, this technology has the ability to open a path to previously unknown levels of image quality, geometrical accuracy, and sensitivity with the highest spectral fidelity. Expect great improvements in X-ray medical applications such as interventional radiology, breast imaging, and preclinical and medical research! 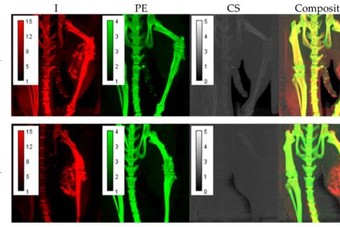 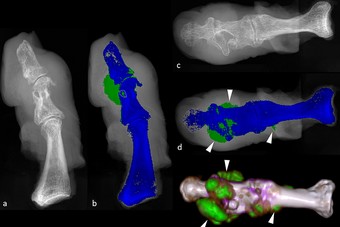 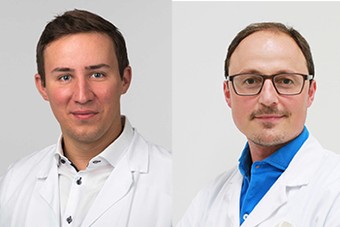 Medical // 08.11.2020 Spectral Photon-Counting Radiography (SPCR) and its use in clinical medical applications